There is no reason to doubt the afterlife.

Just one significant evidence is enough to prove it. That is the divine revelation, the Holy Quran.

Undoubtedly, the Quran is not the word of any human being. If so, whose word is the Quran?

Humans are the best of creatures. Even a disbeliever, who denies Allah Subhanu wa Taala, has belief in this. Now the question is, is the Quran like the words of man? It is clear that the words of the Holy Quran are not like the words of human beings. This is not an uttering or language of the human beings. Any possibility of it being the words of a human has long since proven wrong and impossible. People have completely failed in trying to express in this way.

When someone fails against something stronger or superior, he has to admit the failure. Not making such a confession is impudence. Such waywardness in a character is quite a worse trait! Therefore, it must be acknowledged that the Holy Quran supersedes and wins over the human expressions. The high status and authenticity of the Holy Quran has thus been substantiated.
This Holy Quran claims that it is the word and decree of the Lord of the worlds, the sole Owner and Creator of all things – living and material. Now either you have to accept this or you have to challenge by denying it(!)

The Holy Quran itself has challenged us since its revelation. No one could confront him. Those who have taken stance against the Holy Quran, have been extremely disgraced and debased.

Read and study The Verses 9 to 11 from Chapter (Sura) Qaf and its translation:

Meaning: And We have sent down blessed rain from the sky and made grow thereby gardens and grain from the harvest

Meaning: We send down rain from the sky, and cause gardens and crops to grow. And lofty palm trees having fruit arranged in layers –

Meaning: As provision for the servants, and We have given life thereby to a dead land. Thus is the emergence [i.e., resurrection].

Then in verse 15 of the same Chapter (Sura) Allah Subhanu wa Taala has said:

Meaning: Did We fail in the first creation? But they are in confusion over a new creation.

Allah Taala’s message is lucid. No one can refute or violate what Allah has said.

Therefore, the Holy Quran is the words of Allah – the Almighty. He is the only Creator and Sustainer of all. His every promise is being fulfilled..no one can defeat or suppress it. People are completely helpless against Him. His might and charisma could never be shaken the slightest of bit by anyone. What He wills, happens. What He doesn’t will, doesn’t happen. Man cannot change any of His decisions.

Allah Taala has clearly stated several times in the Holy Quran that He will raise the dead, all of them will be resurrected.

..therefore, how can we be skeptical about the afterlife?! 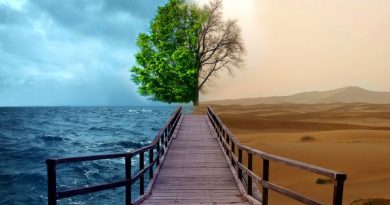